1
9 out of 11 world climatic zones are found here.

See Photos
A unique case when one may find most of the existing in the world climate types within the borderlines of one country: from dry and humid subtropical (in Lankaran) up to mountain tundra (the Big Caucasus highlands). At the same time the most part of the territory of Azerbaijan is situated in the subtropical zone. This allows planting oranges, tangerines, lemons, feijoa, kiwi and other exotic fruits. In south regions Lankaran and Masally one may often see growing banana trees with green fruit ovaries. Even if bananas do not grow ripe these tropical guests enliven the surrounding landscape. No wonder that a favourable climate – early spring, mild winter and plenty of sunny days, makes Azerbaijan the centre of beach tourism. Beach season opens at the Absheron seaside in May and lasts till the end of September.
2
The largest salty lake of the planet – the Caspian Sea. 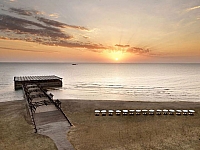 See Photos
All official and unofficial information resources call the Caspian Sea the largest lake in the World. Truly, its area is about 371 000 square kilometres and the maximum depth is 1025m. Its huge area as well as the fact that its bed is composed of ocean type Earth crust allows to call this lake “the sea”. At the same time the water of the Caspian Sea is not as salty as the water of the other seas hence more favourable for swimming, less irritates eyes and does not dry skin. If we additionally mention about excellently developed infrastructure on Absheron seaside and in the famous Nabran resort zone - a lot of hotels and resort centres, boat trips, yacht clubs, fishing, diving - it is evident why Azerbaijan is well-deserved to be considered the centre of coastal tourism in all the Coastal Caspian region.
3
Monuments included into UNESCO World Heritage list.

One of them is historical-artistic reserve Gobustan or simply Gobustan – the rarest monument of the world culture, one of the first centres of human civilization. This archaeological reserve is a flatland located in 60 km to the south of Baku, part of which is a cultural view of drawings on rocks at the area of 537 hectares. Unique proves about the habitants of the region of stone age and of the later ages are collected in Gobustan mountains – drawings on rocks, human settlement points, tombstones and others. There are located remains of the great prehistoric cromlech (a circular composition of vertical stones, Azerbaijani analogue of Stonehenge). There are approximately 6000 drawings in Gobustan – petroglyphes describing people and animals. It is interesting that the XIIth legion of Domician, the Roman emperor, visited the territory of Gobustan in the 1st century A.D. which is proved by Latin inscription on a stone.

Another monument of the world UNESCO heritage is Icheri Sheher (Old City), known as a “fortress” – is a unique historical and architectural conservation area in the centre of Baku. That is one of the ancient and densely populated places of the country and even of the Middle East. Over 1300 families live in the area of 211 square km covered by the conservation area. Archaeological excavations revealed burial vaults of the Bronze Age. When Greeks and Romans wrote about Baku they mentioned about Icheri Sheher. The well-known historical monuments locate here – theMaiden Tower (the 12th century) and the Shirvanshah palace (the 13th-16th century). Besides them a lot of other unique monuments have been preserved behind the massive walls of Icheri Sheher: mosques, minarets, the remnants of caravanserais, bathes.

By the way, the characters of the famous Soviet movie ‘Diamond hand’, played by Mironov and Nikulin, strayed in the back streets of Icheri Sheher. The scenes of the ‘Amfibia man’ movie were captured here as well. There are a lot of souvenirs shops for tourists in Icheri Sheher today. Here you can purchase national clothes, kerchiefs and caps, dishes and even handmade carpets.

Naftalan resort has gained world fame thanks to healing Naftalan oil having no analogue at the planet due to its unique biological composition. The resort is located 20 km far from the second big city of Azerbaijan- Ganja, in the zone of Naftalan oil fields - in Naftalan town.

Naftalan oil has unique healing qualities having no analogue in the world. It provides with various healing effects to human organism, such as anti-inflammatory, pain relieving, vasodilating and stimulating. Healing propeties and effectiveness of the naftalan for different diseases have been proved by the results of thousands of scientific works and monographs.

It is interesting that the first factory for producing naftalan ointment was built by E.I.Eger, a German engineer-concessioner. The factory products as well as the raw material used for production, were exported to Germany. Two naftalan stock companies - ‘Naftalan in Magdeburge’ and ‘Naftalan in Drezden’, which produced medicines from naftalan, have started to function there since 1886. The methods of production of Eger ointments were kept in secret and monopolized.

Today Naftalan resorts provide with treatment for over than 70 diseases thanks to healing naftalan baths.

Azerbaijan is the first in the world by the number of mud volcanoes. 350 out of 800 mud volcanoes in the world are located here! Thousands of tourists visit Azerbaijan every year to see impressive eruption of the mud volcanoes accompanied by explosions and underground roar. Gases come out of the deep layers of the Earth during eructation and immediately inflame. The flame above the volcanoes may reach up to 1000 metres (Garasu volcano).

Travellers love to take photos with mud volcanoes very much, the fantastic view of which reminds the surface of the Moon. It is interesting that geologists from NASA who studied the surface of Mars have come to conclusion that mud volcanoes of Azerbaijan are similar by the structure with highlands of the red planet.

6
A unique national cuisine of Azerbaijan

An Azerbaijani cuisine is one of the most interesting ones in the East. It is remarkable by plenty of different meat, fish and vegetable dishes supplemented by flavoured herbs and spices.

The most experienced gourmets who visit Azerbaijan have turned into loyal adherents of the national cuisine. Products and dishes of Azerbaijani cuisine are original and unique.

The most of Azerbaijani dishes are made of mutton, beef and poultry. Azerbaijanis like other Moslems do not eat pork. The dishes made of chopped meat and, surely, of fish, particularly starred sturgeon are widely spread here. The cuisine of Azerbaijan is famous for plenty of vegetables. Different spices are also used here. Saffron enjoys special popularity in Azerbaijan: this spice is used in over 50 national dishes! Among bakery goods the Azerbaijanis prefer long bread and lavash (flat bread) – the bread baked in tandoor.

Different regions of the country have their own famous dishes. It is a piti (a national soup made of mutton cooked in a closed clay dish in stove), halva (oriental sweet made of sugar, nuts or seeds) in Sheki and levengi (chicken or fish stuffed with minced nuts with spices) in Masally and Lenkeran. You will not find anywhere such bread and gutab (thin half-moon patties made of flour and water paste and stuffed with meat, herbs, pumpkin, pomegranate grains, cheese and onions) like the ones in Gusar!

7
The spirit of fire and the secrets of the Land of Fire.

Since the old times Azerbaijan is known as the Land of Fire. And this is not by chance - Absheron peninsula is rich with oil and gas. Burning gas outlets at the surface were considered a divine secret and attracted here people from all corners of the World: fire worshipers gathered in Baku in ancient times and built their temples on sacred flames. One of those temples is an ancient Zoroastrian temple of flame – Ateshgah. It is located 30 km from the centre of the capital in Surakhany settlement. The temple ages back to the 17-18th centuries and was built by Indian fire-worshipers’ community in Baku.

Burning flame outlets at the surface famed a small Mehemmedi settlement on Absheron peninsula near Baku, where Yanardag (literary “burning mountain”) is located. The hill side has been covered with flame for many years. Many tourists from all over the World visit this place to see the natural miracle. The Yanardag has been protected by the government since 2007 and its territory has been announced the State historical-cultural and natural Reserve.

See Photos
Baku Seaside Park, Boulevard, is the most attractive place for all who visit the capital of Azerbaijan despite the purpose of their visit and it celebrated the 100 year anniversary in 2009. The guests are attracted here by a wonderful landscape design, shadowy alleys, comfortable cafes, which offer the most delicious ice-cream, deserts and appetizers of any kind, tea, Yacht-club, many amusement arcades for children and adults. Park Boulevard, the well-known trade and entertainment centre, International Mugham Centre executed in modern style and the new building of Carpet Museum of Azerbaijan, which attracts visitors by its originality, are located in Boulevard. Sport and concert complex Baku Crystal Hall, opened for Eurovision-2012 contest, glowing with neon lights, has become the true beauty of Baku Seaside Park. Very interesting events are held in Boulevard: concert programs, exhibitions of the masters of national art, open air celebrations etc. The boulevard is currently 5.5 km long and is constantly stretching. It starts from the National Flag Square, where one of the highest flags of the world is waving (the flagpole is 162 meters high), and stretches up to the terminal of International Baku Port. It is planned to refine soon the seaside stretching along the futuristic region of Baku under construction known as the White City and hereby the total length of the Boulevard should reach approximately 15 km.
9
Unique modern architecture

Alongside with historical sights, modern Baku has gained new symbols. First of all, it is the famousFlame Tower complex composed of 3 buildings. One tower is a residential building, the second one functions as a business centre and the third tower is a home for the Fairmont hotel. It is interesting that lighting of Flame Towers is considered to be the best in the world according to the survey of skyscrapercity.com, the influential forum on urban planning. The surface of the Towers is fully covered with LED screens which reflect different visual characters in motion, easily visible from the far corners of the city.

The Heydar Aliyev Cultural Centre has gained not less fame – it is a complex building which includes a congress-centre, a museum, a library and a 9 hectare park. The author of the design of the building is the famous architect Zakha Hadid. By the way, construction of the Flame Towers and the Heydar Aliyev cultural Centre were widely covered in the programs of Discovery and Science Channels.

And finally we have to mention ultra-modern Crystal Hall concert complex at the State Flag Square in Baku where the “Eurovision-2012” contest was held. The facade of the Crystal Hall is equipped with plenty of modern dynamic light units allowing to create different light effects in the hall and outside. The lighting on the external walls reflected the colors of the state flag of each performer when they were appearing on the stage during ‘Eurovision’ song contest. The special effects developer - Swiss Nüssli International AG company confirms that nothing of the kind has been carried out in the other cities of the world. Currently “Crystal Hall” hosts the concerts of the world stars. Jenifer Lopez, Shakira, Rihanna, “San-Remo” stars and others have already performed in the Hall.